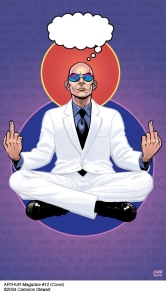 “Blogging makes everyone a writer or a critic. MySpace makes everyone famous until there are so many famous people that no-one’s really famous for anything at all. Twitter turns every twitch, fart and half-baked thought into a global press statement. ‘American Idol’ makes everyone a potential celebrity. The Renaissance/Romantic idea of the special person, the genius, the ‘superhero’, is dying before our very eyes. Everybody wants to be a rockstar and nobody wants to clean the streets. At the same time as all this desperate self-aggrandizement, we’re watching endless reruns of the same shows, the way kids repetitively watch the same DVD cartoons over and over again. Our most successful movies are about children’s cartoon characters as we try to cocoon ourselves with nostalgia and repetition against the howling, incoherent darkness of ecological disaster, paranoid surveillance culture, Terror and financial collapse.”  — Comic book mage Grant Morrison, from an interview on — slight traces of irony — MySpace [via io9]

This entry was posted in Noted and Quoted and tagged comic books, Grant Morrison, our bleak world. Bookmark the permalink.